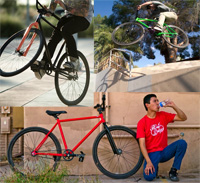 State Bicycle Co. was born in the warm sun of Tempe, Arizona, by a group of fixed-gear cyclists who began organizing social rides and customizing their personal bikes. Seeing an opportunity to help develop the emerging fixed-gear bicycle scene, they started hosting events, producing films of their adventures, and helping others modify their existing bikes, which ultimately attracted new riders to the fun and simplicity of the culture.

Eventually, their passion grew into State Bicycle Co., whose mission is to provide attractive, high-quality fixed-gear and singlespeed bicycles at a great price. Plus, every bike style is produced in limited numbers, so you can rest assured that your bike won’t look like everyone else’s on your next ride.

Following the success of their core line of bikes, State branched out into options for nearly ever rider. These include their City Bikes, Premium series, and Fixed-Gear Freestyle (FGFS) bikes. 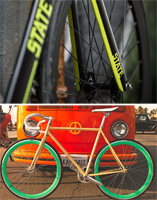 The cruiser City Bikes are wonderful for getting around town with ease and in comfort, while the Premium Bikes make worthy track racers and are equally great for zipping through the city. And, in State’s never-ending quest to progress the sport, their Fixed-Gear Freestyle line features rugged, dependable bikes that are up to the challenge of aggressive street riding, and are equally adept at cruising to the market.

Not much has changed since the early days of State Bicycle Co. They continue to produce videos, host events, participate in bicycle advocacy programs, and sponsor riders, all in an effort to continue to grow the sport of cycling. So if you’re looking for a solid, great-looking ride from a company that is fiercely passionate about their product, culture, and brand, stop by Bicycle Depot of Arizona and take a look at our great-riding bikes from State Bicycle Co.